Home About Me Contact Me I've Been Featured! My Etsy Shop

Okay, so you all know those Toilet Paper Roll Art Projects popping up all over Pinterest? Yep, I've pinned just about every single one--for nearly a year now--and never actually got around to making one. Don't get me wrong, I loved the idea, but every time I started collecting tubes I'd get a pile of them, then think I just didn't have the time, or that it was more of a "want" not a "need," but most of all--didn't feel I had the time or justification to do something "fun." You see, I have this problem--my husband points it out nearly every day--where I just can't justify doing something fun, or something I WANT to do, or something just for me, until EVERYTHING else in the world is taken care of. Work first, play later--right? Yeah, not so right--I'm discovering that this mentality is more like the formula for a mental breakdown! Haha...

But, one day I discovered that my sister had made one--and it was beautiful! So I started collecting toilet paper rolls again, because after I saw her creation I knew I really had to have one. :) Eventually I had quite a nice collection of rolls, but I was still having a hard time getting to it--until one day our bathroom flooded and the stress took me over. I was breaking down, and my husband MADE me (yes, MADE me) do something for myself--"ANYTHING babe, just do something that you don't HAVE to do--you'll feel better, I promise." He promised... yeah, Challenge Accepted my friend.

I dug out my stash of toilet paper rolls and salvaged the ones that had been spared from the flood, turned Psych on the TV, and went to work. 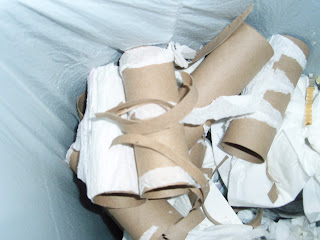 I started with flower petals, intended on making flowers, but when I saw all my petals sitting in a pile on the table, I suddenly began creating something completely different than I had planned. 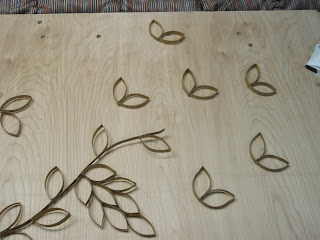 I then found some wire and kept on creating... 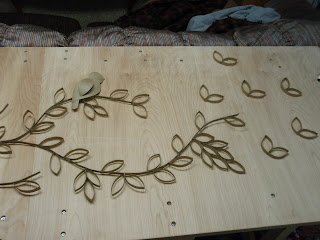 Until eventually the project took over my entire worktable! (The worktable which, by the way, my wonderful husband built for my craft corner--boy I love my man) 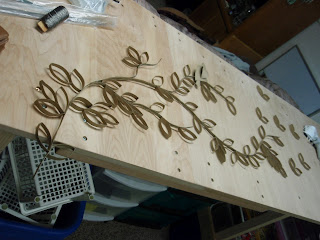 It needed a little something more--so I spliced another toilet paper roll in half, and with some scissors and wire, made a toilet paper bird! 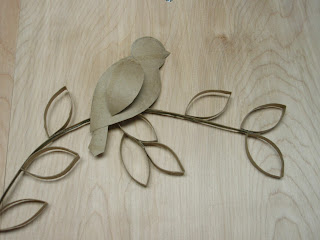 When I finished, I very carefully (this thing is quite large) carried it to the shop and had fun with some color. 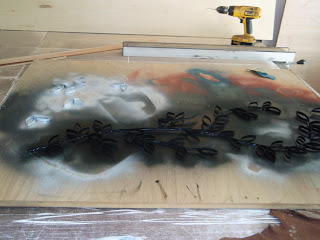 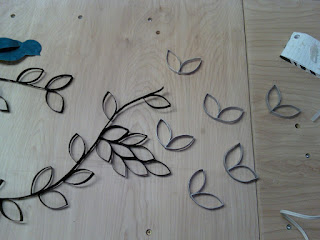 and a beautiful blue songbird! :) 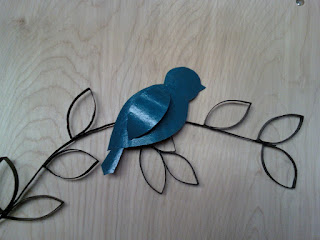 and the final project!! 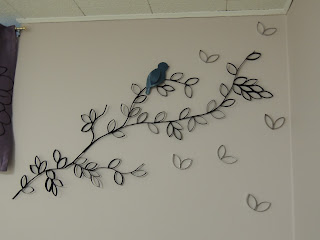 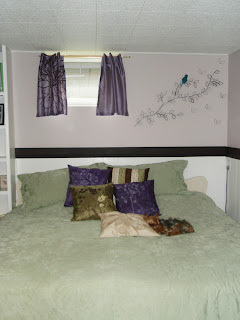 This project was featured!

Posted by Kellianne at 8:30 AM

Yours is prettier than mine. You've inspired me to spray paint mine... you can still see the black printing on the TP rolls. :O I love your birdy! (Heather, what does the bird say? TOO TOO)

Beeee-YOU-tiful! You, Kellianne, are amazing!

THat is so cool! I would have never guessed toilet paper rolls!! Way to recycle!

Very nice, one of the better ones i have seen. Love the bird!

I am inviting you to come and share this in my Show Your Stuff blog hop:
http://juliejewels1.blogspot.com/2012/08/show-your-stuff-37-sweet-and-sour.html

Wow! Who'dathunk that was made from ordinary TP rolls? I think I need to start collecting them... :)

Great wall art! The bird was a really nice touch. The bench, something I want my hubby to make me.

Wow, that turned out great! I love it. I've made a wreath from the tp rolls. I need to try this. It's adorable. I need the cute little bird to go with the pic I linked up at Too Cute Tues. LOL

Your newest follower from the party. :)

Magnificent! The idea is very creative, and well done!

Kellianne that is just stunning! And did you feel better afterwards having done something just for you?? I'm SURE you did - especially after having created this gorgeous masterpiece! Good for you!


Thanks for linking to a Round Tuit!
Hope you have a fabulous weekend!
Jill @ Creating my way to Success
http://www.jembellish.blogspot.com/

I LOVE THAT! I think the fact that you took it a step further is awesome! I'm hoping over from the once a month blog hop! There were so many blogs it's taking me a while to get thru them! Totally worth it! New follower! YAY!

That is a great example of reusing! So creative!
Stopping by from Thee Networking Blog Hop! Love for you to stop by and return the follow when you can.

I host Mom's Monday Mingle on Mondays. Love to have you!
www.thenaptimereview.com

Confessions of a Stay at Home Mommy said...

Thanks for linking up to last week's Tuesday Confessional link party! Your post has been featured so head on over and grab a brag button!
http://www.craftyconfessions.com/2012/08/tuesday-confessional-features_26.html
~Macy

I saw this featured on Around Tuit - such a wonderful end result using the most thrown away and unused item in the world probably! It looks so lovely.

Beautiful! If you haven’t already, I hope you’ll visit "One Creative Weekend" on OneCreativeMommy.com today (or any time this weekend) and link up! I have been wanting to try that for a while. Thanks for the inspiration. Pinning.

What a beautiful piece of art! So glad you took the time to do something you didn't have to do, as Mom's and wives it's hard but necessary! Happy mom's equal happy families!

I’m so glad you linked this up at One Creative Weekend! I love it! Hope your weekend is fantastic.

I like this idea so much that I'll be pinning it and sharing the pin on Facebook at OneCreativeMommydotcom. Feel free to stop by OneCreativeMommy.com and grab a featured button.

I keep putting off my craft till my jobs are done, maybe I shouldn't, as I never get to the craft.

We love this tutorial - it's so clever! We've featured it over on CraftPaperScissors.com :)

let me know how you made the stem and bird please

How did you make the stem? Please let me know!

That’s what I’m wondering too the branches, is that were the wire came in? So is it just very thick wire or did you wrap it with something?

Still looking for ideas on how to make the stem and the bird pattern...please post details.

I looked into other people completing this craft and what they did was using wire you make your frame for the branches then secure the wire branches to the main wire piece/branch then wrap the wire in tap and paint.

I love it! Don't stop creating & you have a great imagination!

The Church of Jesus Christ of Latter-Day Saints